From relatively obscure origin as a son of freed Roman slave, Horace defied all the odds and rose to meteoric heights. Here is everything that you need to know about the life, major works, and achievements of Horace, one the greatest poets and satirists to hail from Rome. 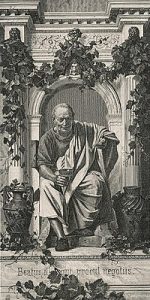 Horace is best remembered as a son of a former slave who went on to become one of the greatest Roman poets. Horace, as imagined by German painter Anton von Werner

The son of a freedman

Horace once described his father as freedman. What this means is that poet’s father was at some point a slave. It is unclear how Horace’s father became a slave, neither is there any details as to how he secured his freedom. What we do know is that Horace’s father worked as a tax collector.

Horace – son of a freed slave

Kind courtesy to the little income Horace’s father earned as an auctioneer’s assistant, Horace was able to gain some bit of education in Rome. Horace would later heap enormous praise on his father for this gesture. His father’s influence on his life is evident in the number of times he makes mention of his father in his poems.

Horace also had a bit of his education at The Academy, the famous school founded by Greek philosopher Plato in the late 4th century BC in Athens, Greece. While in Athens, Horace developed a strong knack for Greek lyric poetry.

His time in Athens coincided with the assassination of Julius Caesar, one of Rome’s most famous generals and later dictator of Rome. With Caesar dead, Marcus Junius Brutus and Gaius Cassius Longinus, the Roman politicians accused of having a hand in the assassination of Caesar, rose to power. Horace is said to have benefited a lot from Brutus’ rise to power as he was given a senior position Brutus’s army.

It’s even said that Horace fought on the side of Brutus and Cassius’ armies that were resoundingly defeated by Mark Antony and Octavian at the Battle of Philippi in 42 BC. Horace was a tribunus militum, a high-ranking officer in Brutus’ legion.

Unfortunately, Horace’s life turned upside down in 42 BC, when Brutus was hunted down and removed from power by Mark Antony and Caesar’s heir and adopted son, Octavian (later Emperor Augustus). The young poet made his way back to Italy only to find out that much of his properties in Venusia, Italy, had been seized.

To make ends meet, Horace took up the profession of writing; however, he did not earn much. Therefore, he worked as administrative clerk in the city, earning just enough to sustain himself. In his spare time, he honed his talents in writing poems, and in no time, he had come out with his first collection of poems.

An amnesty from Octavian 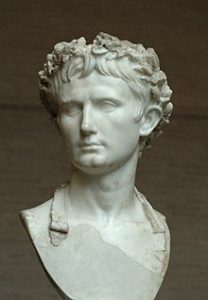 Following what he described as the most humiliating event in his life, i.e. the defeat at the hands of Octavian forces, Horace is said to have quickly accepted an amnesty deal given to him by Octavian.

Horace’s writing career was boosted by his association with fellow Roman poet Virgil, who gave him a few pointers. It was also Virgil who set up a meeting between Horace and Gaius Maecenas, the famous art patron and a political adviser of Octavian (later Emperor Augustus).

With Maecenas’ connections and networks, Horace’s writing career grew in leaps and bounds. Horace’s writing prowess was there for everyone to see. In addition to being a patron of Horace’s works, Maecenas became a longtime friend of Horace.

Horace wrapped his works in a lot of philosophy, with many being inspired by the experiences he had as a child and during his youth. Love, friendship and other pleasures of life also make up a significant portion of the themes in his work.

Horace reads his poems in front of Maecenas, by Russian-born painter and historian Fyodor Bronnikov.

Living between the late Republic to Early Empire of Rome, Horace penned down works with themes of love, longing, and philosophy. His poems and writing style have influenced many ancient poets as well as countless modern writers across the world.

Word History Edu presents four of the most famous works by Horace.

Of all the poems written by Horace, the Odes are the most famous. Released after the Satires and the Epodes, the Odes are lyric poems contained in four books published in different years – the first three, which comprised 88 poems, were released in 23 BC while the fourth book, which has 15 poems, was released around 13 BC. The Odes is praised for its highly charged emotional themes of love, lust, heartbreak, longing and even ethics. Similar to some poems in the Epodes, the Odes is also rife with strong theme of friendship and moderation. The poems cautions readers to desist from succumbing to a self-indulgent lifestyle and extravagant living. His take on moderation is associated with the term Golden Mean – which eschews waste.

Book four is noted for heaping enormous adulation on then-Roman emperor Augustus. Considering the fact that Horace was once a supporter of Brutus, Augustus’ rival, the Odes was the poet’s way of sucking up to the new ruler of Rome, so to speak. As a result, Horace’s Odes can be seen in similar light as Hellenistic court poetry.

The Odes, which was titled Carmina, showered a lot of praise on Emperor Augustus, one of Horace’s patrons

The Epodes, which comprises 17 poems, are regarded as Horace’s first known poem collections. When writing the Epodes, which was released in 30 BC, Horace was inspired the poems and writing style of Archilocus, the Greek poet. The Epodes is famous in the sense that it’s one of the first Roman works to use the iambic meter. The Iambic poetry (also known as shame poetry or blame poetry), which originated from the cults of Greek god Demeter and Dionysus, was known for using a lot of lewd and offensive language, with some used solely for the purpose of entertainment. When writing the Epodes, Horace drew a lot of inspiration from notable Archaic Greek poets who were known for their iambic poetry, including Seminides and Archilochus.

In the Epodes, Horace takes a swipe at the character in the poem, who is described as very arrogant and a man who had forgotten his origins. In denouncing social offenses like corruption and moral decadence, Horace does not get personal; instead he focuses on simply shaming the social ills that existed at the time.

Also in the Epodes, Horace makes mention of his longtime friendship with Maecenas. There is also a part in the Epodes that talks, in an explicit manner, about Horace’s romantic relationship with an older woman. Such was the explicit nature of the writing of those sections that the many publishers in England refused printing them.

The Epistles – a publication of letters to his friends – was Horace’s last published works. His goal was to impart the wisdom he had gained from his correspondences with his friends over his lifetime. The verse letters Epistles also shed light on the art of poetry by exploring the various poetic genres and composition styles. This work, which was published starting around  21 BC, communicates to the reader Horace’s greater interest in moral philosophy than poetry.

Also known as Sermones in Latin, Horace’s work the Satires was made up of two books with a total of 18 poems. It’s said that Horace’s Satires were inspired by works by Greek poets, including Callimachus. Horace also took a bit of inspiration from the works of Roman poet Lucilius. However, unlike Lucilius’ harsh criticism of some Roman politicians, Horace’s Satires had a rather softer tone. The work contained pieces of advice on life, which were mostly based on Horace’s life experiences and beliefs.

How did Horace die? 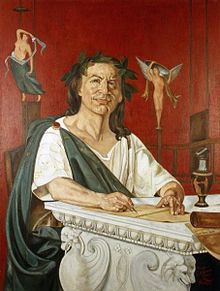 Due to Horace’s use of conversational style, his works caught the attention of many people in the ancient world. Even to this day, many scholars and historians have a deep fascination for the Roman poet’s works. Horace, portrayed by Italian painter Giacomo Di Chirico

After a brief illness, Horace passed away in 8 BC. He was aged 56. Horace’s close friendship with Maecenas is the reason why he was buried next to art patron on the Esquiline Hill in Rome.

Horace received a lot of material support from Octavian and his allies, including Maecenas. In one account, Maecenas, a man of letters, is said to have gifted Horace a spectacular villa (i.e. the Sabine farm) located near present day Licenza, Italy.

Due to his battle with ill health he had to decline an appointment to the position of Emperor Augustus private secretary. Horace is said to have named Augustus as his heir. Horace’s relationship with Augustus was a mutually beneficial. Horace received material support and political patronage, while Augustus benefited in the sense that he had an influential poet on his side. In effect, Horace became the unofficial spokesperson of Emperor Augustus’s regime. In some accounts, Horace and his close friend Maecenas fought for Octavian (Augustus) at the Battle of Actium in 31 BC, when Mark Antony, an ally-turned-friend of Octavian, was defeated alongside his lover, Egyptian queen Cleopatra VII.

Emperor Augustus commissioned Horace to write odes in honor of his stepsons’ (Drusus and Tiberius) military victories around 15 BC.

Meaning of Carpe diem as used by Horace in his work, the Odes

Horace must have been influenced by the difficult circumstances growing up when he injected a new meaning to the phrase carpe diem, which means “Seize the day” or “pluck the day”. Horace entreats his readers in the Odes to not leave things to chance; instead, one should meticulously plan ahead and make a better future for him/herself.

Book 1 of Horace’s poem Odes is famous for having the maxim carpe diem, which is Latin for “enjoy” or “make use of”.