Cimon – the Athenian general and statesman

Born around 510 B.C., Cimon was an Athenian general and statesman who hailed from a very influential aristocratic family. Cimon’s greatest contribution, the one which allows his name to carry on, came when he led Greek forces to victory against a Persian fleet in Pamphylia in 466 B.C. What else was Cimon of Athens most famous for? 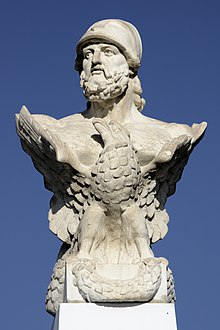 Cimon was a 5th-century Athenian general and statesman. | Image: Bust of Cimon in Larnaca, Cyprus

Facts about Cimon of Athens

Parents: Miltiades and a Thracian princess

Famous for: Defeating the Persian fleet in 466 b.c.

Cimon was born to Athenian general Miltiades and Hegesipyle, a Thracian princess. His father Miltiades, who hailed from the Philaidae clan, courageously rallied an alliance of Greek forces to victory against the Persians in the Battle of Marathon (490 B.C.). Unfortunately, his father went to the grave with a huge unpaid fine, leaving the family with no other option than to marry Cimon’s sister, Elpinice, off to a very wealthy Athenian man called Callias.

Cimon’s rise to prominence in Athenian society came after displaying himself vallantly at the Battle of Salamis against the Persians in 480 B.C.

Shortly after Salamis, he put himself out there and got elected to the position of strategus, a member of the war council of Athens. Owing to how he carried himself, he got reelected every for the next 20 or so years.

Achievements of Cimon of Athens

During his time as statesman and general of Athens, Cimon was able to accomplish a lot of outstanding things. Some of his major accomplishments are as follows:

Cimon played a crucial role making Athens win power struggle and dominance in region against the city-state of Sparta. Prior to that, in 467 b.c., Cimon led a confederate fleet of Greek alliance to victory over the Persians. By so doing he liberated a number of maritime states that were under Persian rule. Athens then emerged as the leader of the Greek maritime states, supplanting archrival Sparta.  Cimon was then appointed the military commander of an Athens-led alliance known as the Delian League (also known as the Confederacy of Delos).

As an influential military commander, Cimon led an Athens-led force against Persian army that had established a foothold on the Thracian coast and other Greek coastal cities. He is praised for defeating the Persian fleet on the Eurymedon at Pamphylia in 466 B.C. In that battle, he was in charge of a fleet of about 200 ships. The victory seriously reduced Persia’s dominance in eastern Mediterranean.

Helped broker a five-year peace deal between Athens and Sparta

In addition to being known for building a very strong Athenian fleet, Cimon is remembered for negotiating the five-year peace treaty between Athens and Sparta in 451 BC. A big advocate for greater cooperation with Sparta, Cimon was well-positioned to broker the deal.

Athenian general Cimon long maintained that Athens and Sparta act as allies, with Sparta dominating the land, while Athens dominates the coastal areas. He reasoned that such arrangement would allow Greece stand a better chance in its fight against Persian aggression.

Other military victories and achievements

Growing up, he drank quite a lot, often acting in a very brute and unrefined manner. Historians have stated that Cimon’s behavior resembled more of a Spartan than an Athenian. Such was his appreciation of Spartan culture that he even gave one of his sons a Spartan name.

This trait of his was in line with his strong inclination to support pro-Sparta policies. Unlike the likes of Pericles and Ephialtes, Cimon and many of his conservative aristocrat friends considered Sparta an ally of Athens.

Going against Ephialtes and his allies, Cimon was able to convince Athens to lend a helping hand to Sparta in 462 BC. He was given command over 4,000 hoplites to quell revolts against Sparta. His military intervention was a fiasco as Sparta felt that Athens wanted to stab them in the back.

After a disastrous showing in his bid to support Sparta, he was forced to go into exile from 461 BC to 451 BC. Cimon’s absence from Athens allowed the likes of Ephialtes and Pericles to assume leadership of Athens. The exile of Cimon also resulted in the dismantling of Cimon’s power base, including the Athenian Council of the Areopagus. Ephialtes and Pericles basically transferred power from the powerful elites and aristocrat friends of Cimon to the lower-class Athenians.

Cimon’s pro-Sparta initiatives were also scrapped off by the more liberal thinking Pericles and Ephialtes.

Although he was good general, perhaps the greatest Athens ever saw, he was not very keen on promoting democracy in Athens. His goal of keeping the aristocratic party in power resulted in him clashing with pro-democracy Athenian statesmen like of Pericles and Ephialtes.

His antidemocracy and pro-Sparta policies often brought him into direct confrontation with Athenian pro-democracy statesman Pericles. Image: Bust of Pericles

How did Cimon of Athens die?

Cimon is said to have died around 449 BC. He probably died around the time he was leading an unsuccessful siege against Persian and Phoenician forces in Citium in Cyprus.

In 463 b.c., famous Athenian statesman Pericles failed at prosecuting Cimon who was charged with failing to capitalize on an advantage to conquer Macedonia. Cimon was accused of turning the other way after taking bribes from Alexander I of Macedon.

After his victory over pirates along the coast of Scyros, he is believed to have back the remains of Theseus, the Greek mythical king and founder of Athens, back to the city of Athens.

On his mother’s side, he was the grandson of the Thracian king Olorus.

Greek historian Plutarch was full of praise for Cimon, comparing Cimon to the likes of Themistocles and Militiades, his own father.

Cimon championed the reconstruction of buildings and temples that were destroyed during the Greco-Persian wars. For example, he supported moves for more construction works to be carried out on the Acropolis.

To many historians, Cimon ranks as one of the greatest Athenian generals ever. Many of his achievements came on the battle field or in the world of foreign policy.