Discover how Ludwig van Beethoven (1770-1827), the famous German composer and pioneer of the Romantic Era in music, left an indelible mark on the world with his timeless and spellbinding symphonies – nine in total.

Symphony No. 1 in C Major

Beethoven was in his mid-20s when he finished this work. Although not as spectacular and revolutionary as his later symphonies, the First Symphony still comes out as a profound piece of work. The up and coming composer had just spent some years studying under the famous Austrian composer Joseph Hadyn, whose influence can be slightly felt in some parts of the symphony. In the nutshell, Symphony No. 1 is full of energy and offers a glimpse of the marvels that Beethoven would go on to produce in his lifetime.

Symphony No. 2 in D Major

Symphony No. 3 in E flat Major

Also known as ‘Eroica’, this piece, to put it lightly, caused a lot of ripples in the music world when it was released. Many historians firmly agree that this symphony is what ushered in the Romantic genre in classical music. It was truly revolutionary in every sense of the word. Beethoven unleashes a kind of genius not seen since the era of Mozart. The opening of the symphony wastes no time in making a huge entrance. The composer then knocks it out of the park with his signature classic move.

Symphony No. 4 in B flat major

Unlike its predecessor, Symphony No. 4 was failed to reach the lofty heights that Beethoven had set himself. That doesn’t mean that the fourth symphony wasn’t brilliant. Perhaps people were expecting Beethoven to outdo his third symphony with the fourth, which avoided the bold and theatrical themes that characterized the third. In Beethoven’s fourth symphony, the listener is taken on mournful trip but still leaves you with a bit of joy at the end.

Symphony No. 5 in C minor

Beethoven’s Symphony No. 5 is generally famed for its opening motif, which many have come to refer to as ‘fate knocking at the door’. It begins with an overarching theme of the inevitability of loss in life. At the time of its composition, Beethoven had come to accept his hearing impairment. This explains why Beethoven starts in darkness of the C minor key. The listener is then transported to a thoughtful place, where strong emotions like anger and agony ultimately give way for clarity and victory. The work then ends in the light of C major. In other words, the symphony perfectly captures how despair and pain succumb to hope and joy.

To some people and music critics Beethoven’s Symphony No. 5 in C minor is the best thing that ever happened to classical music. This assertion is supported by the four notes that introduce the symphony. There is hardly any note in classical music as popular as the four dark, trembling notes of this symphony.

Symphony No. 6 in F Major

Wrapped in themes of love for nature and the feeling one gets in nature, Beethoven’s Sixth Symphony is a really excellent piece of work. It basically reinforces Beethoven’s dominance of the Romantic Era. Beethoven communicates to the audience his deep love for taking a stroll in nature and just enjoying life in the countryside. In the second movement, the sound of birds can be heard slightly. It is for this reason they symphony is also known as ‘Pastoral’.

Symphony No. 7 in A major

Such was the brilliance of Symphony No. 7 that music lovers that attended the premier in 1813 requested for the second movement to be played again. Beethoven’s name at the time had become synonymous with genius so to speak. Regarded as one of his most famous symphonies, the Seventh Symphony relies heavily on powerful rhythms.

Symphony No. 8 in F major

Although still rocked by his hearing loss and intermittent stomach pains, the German composer was flying very high in his career. Baring those challenges, the composer still drew a lot of joy in composing. This was evident in the Eight Symphony, which he described as “my little symphony in F.”  Perhaps it was the wonderful themes that he used in the eight that made it one of his favorite works. Interestingly, he used about four months to compose the symphony.

Symphony No. 9 in D minor

Taking a great deal of inspiration from the famous German playwright and poet Friedrich Schiller’s poem Ode to Joy, Beethoven incorporated themes of unity, friendship and triumph into his Ninth Symphony, which was completed in 1824. The symphony could not get any bigger than it did following its premier, where the composer received a thunderous standing innovation. As he was completely deaf by then, someone in the orchestra had to alert him of the rapturous applause from audience.

It speaks volumes of the sheer brilliance of Beethoven’s finale (the fourth movement) of the Ninth Symphony – ‘Ode to Joy’ – when a political and economic organization as massive and important as the European Union uses it as their anthem. Beethoven’s ‘Ode to Joy’ was adopted by the EU in 1985.

The Ninth Symphony was nothing short of a revolutionary piece of music, as it pushed classical form really far. The symphony, which many consider Beethoven’s biggest ever composed, is generally seen as a celebration of music. It’s inspired countless musicians over the world, including colossal figures like German composer Richard Wagner and Austrian composer Gustav Mahler. 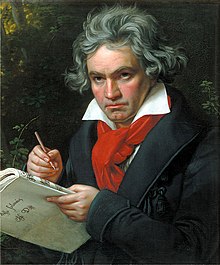