When one thinks of heroines in Greek mythology, the first people that come to mind are the fierce women warriors of the Amazon Nation. However, there were quite a number of non-Amazon warriors and master huntswomen whose courage and tenacity was up there with their male counterparts in Greek mythology. One of such women was Atlanta, the only female warrior among the Argonauts.

Abandoned at an infant age in the wilderness by her father, Atlanta had such a tough start to life that had it not been the steel of courage that pumped through her veins she most likely would have died. This female warrior distinguished herself on so many occasions that mythographers almost always rank her among the greatest female heroines in Greek mythology.

So, who was Atlanta? And what were some of her most famous expeditions? Below we take a closer look at the captivating story, power, and abilities of Atlanta.

In the myth, Atlanta was abandoned by her father at an extremely young age. In some versions, the baby Atlanta was left to die on Mount Parthenion (in present-day Peloponnese, Greece) by her father who was heavily disappointed that he had a daughter instead of a son. As fate would have it, just before Atlanta got exposed to the elements a she-bear came to her rescue. The Greeks believed that she-bears were one of the symbols of Artemis, the Greek goddess of the hunt and moon. Some say that Artemis had taken pity on the baby and decided to rescue her by sending a she-bear.

The she-bear, who had lost all her cubs to a group of ferocious hunters, took the baby Atlanta to her lair and raised Atlanta as her own. This upbringing of hers explains why she is described in the myth as a swift-footed warrior and huntress. Atlanta also came to despise men, preferring to remain a maiden and follower of Artemis, who by the way was maiden herself. This female warrior is believed to have done everything in her power to protect her maidenhood. Atlanta once killed two very powerful centaurs – Hylaios and Rhoecus – for trying to take advantage of her.

A devout follower of Artemis, Atlanta often donned a knee-level sleeveless tunic, almost similar to the type that Artemis wore. It was also common to have depictions of Atlanta showing her in the wild, tendering to animals of all kinds.

Atlanta and the Argonauts 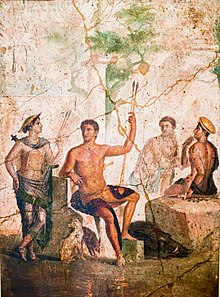 Meleager (sitting on a rock, with two spears) and Atalanta (standing) reposing after the Calydonian boar-hunt. Antique fresco from Pompeii.

Atlanta’s hunting prowess and sheer courage helped earn her a call up to Greek hero Jason’s Argonauts. The Argonauts refer to a group of fierce hero-warriors who accompanied Jason on so many adventures, most famously Jason’s quest to find the Golden Fleece, a symbol of kingship and power.

Being invited to such an honorable group is testimony to just how much Atlanta’s skills and abilities were valued. The myth also has us believe that Atlanta was the only female warrior in the Argonauts.

While on those adventures with the Argonauts, Atlanta certainly did not disappoint. She fought gallantly alongside her male counterparts and helped Jason steal the Golden Fleece from King Aeëtes in Colchis (located in present-day western Georgia). In addition to Jason, Atlanta was in the company of the Laertes, the king of the Cephallenians, and the sons of Thesipae, founder-king of Thesipae in Boeotia. 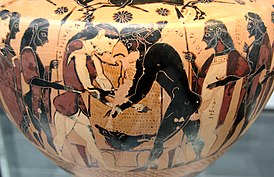 Atlanta famously defeated Peleus – the Greek hero and king of Phthia, husband of Thetis and father of Achilles | Image: Black-figure pottery showing a wrestling match between Peleus and Atalanta during the funerary games of King Pelias. In the background, the prize of the duel: the skin and the head of the Calydonian boar.

In a series of athletic competitions staged in honor of Pelias, the deceased king of Iolcus, Atlanta knocks down Peleus, Greek hero and king of Phthia. What makes this story even more memorable has to do with the fact that Peleus was the husband of Greek nymph Thetis and father of Greek hero-demigod Achilles. 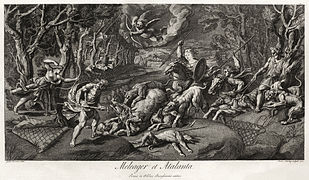 Atlanta and the Argonauts | Image: Meleager et Atalanta, from a drawing by Giulio Romano, engraved by François Louis Lonsing. Atalanta is at far left with bow; Meleager is right of her, spearing the Calydonian boar (1773).

The Calydonian boar was a fierce wild creature sent by Greek goddess Artemis to terrorize King Oeneus of Calydon and his people. The King had incurred Artemis’ fury for his failure to offer sacrifices to the goddess. In addition to mauling many Calydonians to death, the Calydonian boar also prevented the people from growing crops; hence, starvation and misery became the order of the day.

A good number of the members of the Argonaut, including Atlanta, Peleus, Telamon, Meleager and Theseus, were invited by King Oeneus to eliminate the Calydonian boar. In this mission, Atlanta fared extremely well, justifying her call up to the expedition. Her fighting skills and ability to track the paw prints of the animal came very handy during the hunt of the Calydonian boar.

In a hunt that saw the demise of fighters like Hyleus and Ancaeus, Atlanta is famed to have been the first warrior in the expedition to strike the boar. Her strike considerably weakened the wild beast. This allowed other members of the expedition to inflict further lethal blows on the animal, bludgeoning the creature to death.

The hide of the Calydonian boar

Appreciative of Atlanta’s crucial role in killing the Calydonian boar, a leading member of the Argonauts Meleager gave Atlanta the hide of the boar. No sooner had she received this trophy than did Plexippus and Toxeus, uncles of Meleager, seize the hide. The men, who were undoubtedly sour and jealous, believed that Atlanta did not deserve such an honor simply because she was a woman. Meleager then responded to his uncles’ misogynistic comments by striking them down, causing Althaea, Meleager’s mother, to descend into a severe depression. Althaea then threw an effigy of Meleager into a fire, causing the death of Meleager.

The famed footrace between Atlanta and Hippomenes

The virgin huntress Atlanta put many suitors to the test in order before Hippomenes eventually won her hand in marriage by beating her in a footrace | Oil painting depicting the footrace between Hippomenes and Atalanta by Noël Hallé (1711-1781), housed in the Louvre Museum.

A devout follower of the goddess Artemis, Atlanta always maintained the belief that settling down and marrying would be her downfall. This view of hers was confirmed by an oracle that she consulted before going on the hunt for the Calydonian boar. However, all of that changed when she returned from the hunt. Her father had appeared out of nowhere into her life and accepted her as his daughter. Therefore, preparations were put in place for Atlanta to get married.

Completely opposed to marriage, Atlanta came up with an idea: she promised her father that she would marry whichever man could outrun her in a footrace. It was completely unthinkable for someone to go against Atlanta, considering how swift-footed a warrior she was. However, this did not stop men from all over Greece thronging to the ceremony to go against the female warrior, even though they were put to death when they failed.

As expected, many suitors came and many failed and were ultimately put to death. This continued until a young man by the name of Hippomenes, the son of King Megareus of Onchestus, showed up. Hippomenes spent a great deal of his childhood as a student of Chiron, the wisest and justest of all the centaurs. By so doing he had acquired immense skills in a host of disciplines, including being very swift in race of all kinds.

Hippomenes knew that he needed something more than just speed if he was going to outran the virgin huntress Atlanta in the footrace. Hippomenes also received a bit of help from Aphrodite, goddess of love and beauty. Aphrodite, who had come to dislike Atlanta because the virgin huntress had shunned all love interests from her suitors, gave Hippomenes three golden apples. According to Roman poet Ovid, the apples sumptuous looking apples were plucked from the sacred apple tree in Tamasus, Cyprus. In some accounts, however, the apples came from the famous garden of the Hesperides.

The Greek goddess of love ordered Hippomenes to drop the apples, one at a time, during the race with Atlanta. This was intended to distract Atlanta. Hippomenes was able to close in on Atlanta’s lead after the huntress stopped to admire the third apple. In the end, the young man from Onchestus emerged the winner of the footrace. Atlanta then tied the knot with Hippomenes. 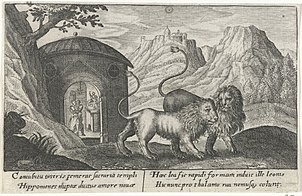 A woodcut engraving of the transformation of Atalanta and Hippomenes. Rijksmuseum

After winning the race and Atlanta’s hand, Hippomenes in his excitement completely forgot to honor the promise he had made to Aphrodite. According to Ovid, Aphrodite exacted a harsh punishment on not just Hippomenes but his bride, Atlanta, as well. The goddess of love caused the couple to be consumed by maddening lust during their time in Cybele’s temple. And so, the couple went ahead to have sex in the temple, completely disregarding the consequences of their actions. Cybele, a mother goddess, felt insulted by the actions of the couple and turned them into lions. Atlanta and Hippomenes were then placed in the service of Cybele to draw the goddess’ chariot. In a different account, Atlanta and Hippomenes had sex in a the temple of either Zeus or Rhea. 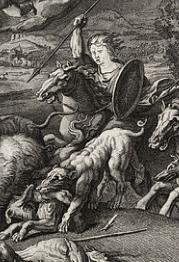