His brother’s death paved the way for Akhenaten to become heir to the throne of Egypt. It’s been claimed that he learnt the ropes of kingship by serving as co-regent in his father’s final few years on the throne.

Following the death of Amenhotep III, his oldest son Akhenaten was crowned pharaoh of Egypt around 1353 BCE. He went by the name of Amenhotep IV, a reference to the immense adulation he and his father paid to the sun god Amun (Amen). 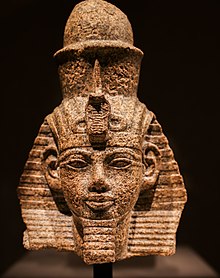 Devout followers of the sun god Re, both Amenhotep IV and his father Amenhotep III were worshiped as the divine representatives of Re. Throughout the history of ancient Egypt, kings and pharaohs were revered as the physical manifestations of gods on earth | Image: Amenhotep III wearing the double crown of Upper and Lower Egypt, the nemes with cobra and the ceremonial beard

His first ten or so years on the throne saw him follow in his father’s footstep as he became more comfortable with the position. From the ancient Egyptian capital of Thebes, Amenhotep IV consolidated his power by building upon the infrastructural projects began by his father. For example, he built many large temples in Thebes. The largest of those temples built by Amenhotep IV was the Gempaaten temple, located at Karnak, Luxor.

Beginning around the tenth year of Amenhotep IV’s reign, the relatively young pharaoh had started developing a strong obsession to Aten, a largely minor sun deity in the Egyptian pantheon.

His admiration for Aten actually began during his sed festival celebration, where instead of heaping immense praise on traditional gods like Amun, Ptah, or Osiris, Amenhotep chose to place Aten at the center of his religious celebrations.

He changed his name from Amenhotep to Akhenaten, a reflection of his strong devotion to the sun god Aten. As his reverence for Aten increased, the cult of Aten began to dwarf the cults of other gods in ancient Egypt. This was also due to the fact that Amenhotep IV purposely curtailed the worship of other Egyptian gods, including the chief god and sun god Amun (Amen). Some say it was an entirely political move, as he sought to stave off the political and religious elite the immense power they held in Egypt. 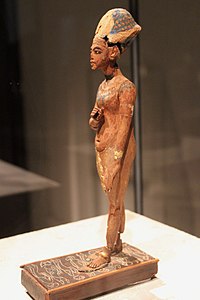 By discouraging the activities of the cult of Amun, Pharaoh Akhenaten was able to reduce the immense power priests of Amun held. Likewise the wealth of those priests shrunk drastically. By so doing, Akhenaten was able to consolidate his hold on the kingdom. Image: Wooden standing statue of Akhenaten.

During his 17-year reign, there was scarcely any opposition to Pharaoh Akhenaten’s religious and political reforms. This was because the ancient Egyptians revered their pharaohs as the physical manifestations of the gods. It must be noted that it would come as no surprise that the people (mostly priests of Amun) that those religious reforms affected the most were inwardly praying for the end of Akhenaten’s rule.

Aten was a sun god in ancient Egypt who got elevated to lofty heights by Pharaoh Akhenaten. This god was described as a distant god whose radiance reached every nook and cranny of the land of Egypt. He was also seen by worshipers as an untouchable god whose ways were beyond the comprehension of the people, perhaps except the pharaoh.

It was believed that Aten was the creator god, the giver of life and the deity who nurtured the spirit of the cosmos. According to Akhenaten’s poem, “Great Hymn to the Aten“, Aten was responsible for creating everything in the universe. So basically, Akhenaten’s religion venerated Aten in almost the same way Amun or Re was venerated by the ancient Egyptians. 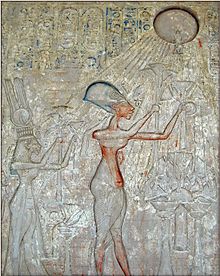 Incorporating many aspects of sun god Ra, Aten was revered as the disc of the sun. Akhenaten made Aten the dominant Egyptian deity throughout his reign, building many magnificent temples in Aten’s honor | Image: Akhenaten, Nefertiti, and Meritaten (obscured) worshipping the Aten

Atenism and defunding of the institutions and temples of Amun

A devout advocate of Atenism (Aten religion), Pharaoh Akhenaten defunded many traditional religious institutions and temples of Amun | Image: Small Temple of the Aten at Akhetaten

The religious reforms taken by Amenhotep IV could be compared to the Protestant Reforms instituted by England’s King Henry VIII. Perhaps the only difference is that Henry VIII’s reforms perpetuated into the future.

Akhenaten channeled resources from the cult of Amun to the cult of Aten. In some more drastic moves, he is said to have closed down a number of temples of Amun at Memphis and Heliopolis. He also either demoted or had high priests of Theban gods (Khonsu, Mut, and Amun) killed. To ensure the smooth implementation of his religious reforms, he likely had to grease the palms of top religious officials.