Best known for his theory of motivation based on his hierarchy of needs, the 20th-century American psychologist was one of the most influential in the field of humanistic psychology. Abraham Maslow’s contributions helped set the tone for positive and transpersonal psychology.

Early Years and Interest in Psychology

Born in 1908 in New York City, he came from Russian-Jewish descent. His parents fled from Eastern Europe to escape persecution and to find  greener pastures. Growing up, Maslow loved to read at the local library where he developed his passion for academic endeavors.

He pursued psychology at the University of Wisconsin after graduating from high school.

Prior to joining the faculty of Brooklyn College in 1937, he was admitted at the New School for Social Research in New York City to study Gestalt psychology. From 1951 to 1969, he served as the head of the psychology department at Brandeis University in Massachusetts.

Maslow’s interest in the field of psychology was shaped by the ideas of renowned American psychologist John B. Watson. Watson’s behaviorism had such a profound influence on Maslow that he made it his life mission to tread a career path in psychology. He earned his master’s degree and 3 years later, bagged his PhD, both from the University of Wisconsin.

One of Maslow’s earliest works involved a laboratory-based research where he used dogs and apes to understand the “emotion of disgust” in dogs, as well as acquire  an understanding of the learning process of primates.

Overtime, Maslow abandoned both behaviorism and psychoanalysis. He asserted that psychoanalysts and behaviorists were entirely focused on the “sick half of psychology” to the neglect of “the healthy half.” He also felt that the two theories neglected all the creative aspects and potential of human beings.

Influenced by the philosophy of existentialism, Maslow rose in prominence as a key contributor to humanistic psychology in the United States. This field of psychology  became particularly  appealing in the mid-20th century because it acknowledged and appreciated human experience.

Maslow’s work departed from the then psychology’s usual focus on pathology. He focused his attention on the analysis of what humans are expected to do in order to reach their potential. In two of his major works, “Motivation and Personality” (1954)  and “Toward a Psychology of Being” (1962), Maslow maintained that each individual possessed an innate drive for self-actualization.

The psychologist further explained in his “hierarchy of needs” that human beings needed to achieve fulfilment in the more elementary physiological requirements, such as food, safety, love and belongingness, esteem before they can move on to self-actualization. 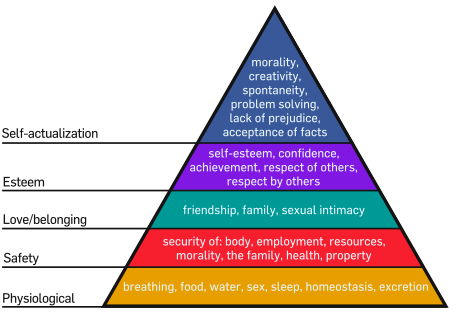 Abraham Maslow is critically acclaimed for creating the Maslow’s hierarchy of needs. That work of his is regarded as one of the most popular theories in psychology. Image: Hierarchy of Needs by Abraham Maslow

Next are needs that pertain to safety. This tier includes things that would bring personal and emotional stability and security. These include healthcare, employment and wealth.

Third on the hierarchy is love and a sense of belonging which may be achieved through friendships, intimacy and family. He felt human beings are created with a need to be loved, supported and to be connected to others. Without this support system, our psychological and emotional growth would be retarded.

The fourth tier is based on a person’s self esteem, that is, the need to feel confident in order to achieve social stability. Maslow argued that human beings are wired to feel a sense of worth, which if absent, would result in feelings of inadequacy, depression and despair.

This is positioned at the top of the hierarchy.  According to Maslow, human beings possess the need for intelligence stimulation  and creativity so as to maximize their potential. Therefore,   discontentment and anxiety would emerge if a person feels he is under-utilizing his strengths.

Maslow defined self-actualization as “the full use and exploitation of talents, capacities, potentialities, etc.” He stressed that self- actualization was limitless, and that people would keep pursuing much greater heights. Self-actualization needs include being in a romantic relationship, parenting and harnessing gifts and  pursuing a vision.

Maslow conducted a study on self-actualizing people with very good mental health. He noted that these people shared some common characteristics including, wholeness, self confidence and the capacity to enjoy peak experiences.

Maslow went over the ideas regarding his pyramid at the latter part of his career. He added a sixth need which was above self-actualization. He called it “self-transcendence.” According to him, self-transcendence is a person’s need to “further a cause beyond the self and to experience  a communion beyond the boundaries of the self through peak experience.”  Maslow described peak experiences as moments of rare and extremely ecstatic insight into an advanced form of life that may cause a euphoric feelings in the one who experiences it. Behaviors in this category include supporting a cause such as social justice, acquiring an advanced knowledge in science and seeking a “truth.”

Maslow deduced that self-actualizing individuals are more likely to have peak experiences as they have demonstrated the highest form of personality development. His previous work on the subject indicated that triggers for peak experiences included music, sex, art, mystical  experiences and adventure.

Maslow’s contemporaries saw an analogy between his definition of peak experiences and Mihaly Csikszentmihalyi’s “flow psychology,” which is a basic concept in modern positive psychology.

The Relevance of Maslow’s Theories

Maslow aimed at helping people live their best lives while being mindful of their vulnerability as humans.

He believed that an individual will achieve self-actualization by a steady progression through his hierarchy of needs.

In the area psychotherapy, Maslow helped pioneer the argument that the focus of therapy should be to remove the erroneous views people have about themselves so that they can enhance their sense of self.

Apart from mental health, the principles of his hierarchical model have influenced urban planning. In order to develop cities that will be deeply satisfying for inhabitants, there should be the provision  of standardized services and a thriving economy.

Maslow’s principles have been applied to business. To ensure employee efficiency and high productivity at the workplace, employers shift their attention to prioritizing and addressing the fundamental needs of employees.

Again, when employees are made to feel a sense of community or as part of a whole, there is a higher probability that they would have a clearer understanding of the organization’s vision and endeavor to help actualize it.

In order for law enforcement officers to function in their full potential, their physiological needs must first be met through better labor laws and cooperative procedures.

Again, Maslow’s principles have found a foothold in the teacher-learner relationship. In order for learning to be successful, the teacher must first guide the learner to develop a healthy self esteem and a sense of duty towards his own education.

Clients and consumers must be treated with respect and have their needs duly considered if businesses are to flourish.

Other Interesting Facts about Abraham Maslow